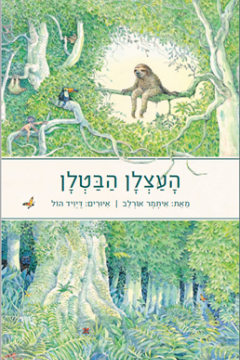 On a tree in a jungle in South America live a family of sloths who, like all the other sloths in the world, do everything very slowly and keep falling asleep all day long. But this doesn’t trouble them in the least. The sloths see day to day life as one big bore and never even bother to leave their tree. All they care about is going back to sleep, because there, in the land of dreams, the sloths become their true selves – the most daring and adventurous animals in the jungle. Together, they dream the wildest and most exciting dreams, so it’s really no wonder that they’re so exhausted and slow when they finally wake up and can think of nothing but going back to sleep.

In this family, there is one young sloth who has had enough. He doesn’t want to romp around in the land of dreams anymore, he’s tired of the pointless race from one adventure to the next. He wants to have other dreams, calmer, more meditative ones, that will give him a chance to look around in peace, both at the dream world and at the real world surrounding them. But every morning he wakes up so tired that he has no choice but to go back to sleep. “You’re a lazy sloth,” his family members tease him, and only Grandma Sloth comes to his defence, “Leave him be,” she says. “It’ll pass.”

After the lazy sloth fulfils the dream he’s always had of having serene dreams, he wakes up in the morning and, to his surprise, is full of energy. He can live like the rest of the animals, wander happily from branch to branch and even explore the bottom of the tree. However, his wanderings lead him to carelessly reveal the sloth family’s whereabouts to a hungry black jaguar, who wants to eat them. His parents don’t know what to do…

The Lazy Sloth is an amusing travel story that begins in the wild dreams of an idle family of sloths and continues in the vibrant and exotic jungles of South America. At the same time, it is an allegorical story that tries to remind us that beyond the ongoing pursuit of immediate gratification lies the real, simple world, the one which the more curious and meditative among us, “the lazy sloths”, continue to see and wonder at.