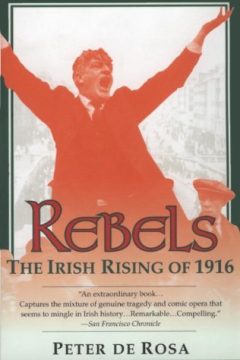 Peter de Rosa dramatically recreates the extraordinary story of how, at Easter 1916, a thousand Irish men and women, armed with only pikes and rifles, challenged the military might of the British Empire and forever changed the course of Anglo-Irish history. The sounds, sights and smells of the moment all come sharply alive in Peter de Rosa's brilliantly evocative narrative. Rebels holds the reader in thrall as poignant comedy blends with harrowing scenes of war.

Reissued by Endeavour Press in 2016, for the centenary of the Easter Rising.