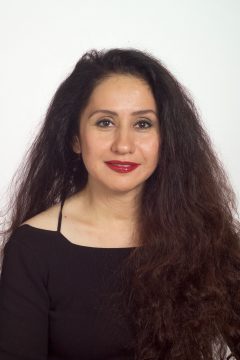 The Saudi Arabian author Raja Alem was born in Mecca and now lives in Paris.

Her works include ten novels, two plays, biography, short stories, essays, literary journalism, writing for children and collaborations with artists and photographers. She often appears on the international cultural and literary scene, especially to discuss and give workshops on spirituality, children’s creativity, and links between east and west. She has received many awards in the Arab world and in Europe, including one from UNESCO for creative achievement in 2005, and another from the Lebanese Literary Club in Paris in 2008.

With her sister, the artist Shadia Alem, she established and sponsored a Cultural Club & Recreation Center for the girls of Mecca, which was a pioneering step in enriching women’s knowledge and giving them space to exist creatively. She is a member of English PEN International, a member of the Board of Trustees of Al-Mansouria Foundation for Culture and Creativity, Paris, a member of the House of Photographers, Jeddah, and a member of Al-Yamama news foundation. Raja and Shadia Alem represented the Kingdom of Saudi Arabia for its debut participation at la Biennale di Venezia 2011.

In 2011, her novel The Dove’s Necklace was awarded the prestigious International Prize for Arabic Fiction. Her most recent novel Sarab has been published in German and in English.