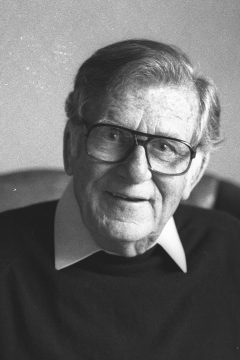 Morris West was one of the great story-tellers of the twentieth century. He was born in Melbourne, Australia, in 1916. After a difficult childhood, at the age of 14 he joined the Christian Brothers Juniorate in Victoria. On the eve of taking his final vows almost 12 years later, he had a change of heart and chose a more worldly existence. Following his first marriage to Elizabeth Harvey in 1941, he was appointed Lieutenant in the Intelligence Division of the Australian Military Forces, and it was while working as a cipher expert in Northern Australia in 1942 that he wrote his first, autobiographical, novel, Moon in My Pocket, one of the first secular titles to lift the veil on the religious life.

West later worked in publicity for Murdoch’s newspaper chain, and set up his own radio production company. In 1953, he sold the business and turned full-time to writing, with the support of his second wife Joy. Morris West published one best-seller after another and his novels gained a reputation for being uncannily prophetic. He wrote 28 novels, many of which were made into films. Published in 27 languages during his lifetime, his intelligent, eloquent narratives reflect a fundamental determination to tackle the deeper concerns of his time, and resulted in the sale of an estimated 70 million books worldwide. West died at his desk on October 9, 1999, pen in hand, working on his unfinished manuscript The Last Confession.

Recently described by Mark Lawson at The Guardian as “the pope of the Vatican thriller”, West’s bestselling novels gained a reputation as thrillers which examine man’s dilemmas and his moral conscience in a post-World War II age, assaying questions of principle and honour in the face of challenging circumstances. A man of his time, West’s novels continue to resonate with a younger audience similarly confronted by a changing world.