An Appetite for Violets 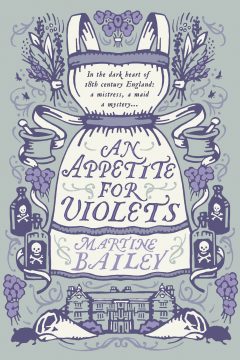 ‘That’s how it is for us servants.  No one pays you much heed; mostly you’re invisible as furniture.  Yet you overhear a conversation here, and add a little gossip there.  A writing desk lies open and you cannot help but read a paper.  Then you find something, something you should not have found.  It’s not so very often, with your servants’ broken view, that you can draw all the ingredients together. And it’s a rare day when all the parts combine in one story, and the chief of those parts is you.’

Europe, 1773. Sharp-witted cook Biddy Leigh is reluctantly persuaded to leave England by her master’s untrustworthy young wife, Lady Carinna.  Having promised to write down her adventures in her book of recipes, The Cook’s Jewel, Biddy grows intrigued by her fellow travellers’ secrets.  In France she discovers her mistress is fleeing England because she is expecting a child that is not her poxed husband’s.  As Carinna draws Biddy into her increasingly desperate scheming, she finds herself embroiled in a murderous conspiracy – and suddenly the secrets Biddy holds could be her ticket to a better life – or her downfall…

Praise for An Appetite for Violets

‘Martine Bailey writes with such easy, compelling grace, and in a fascinating new genre – best described as culinary gothic. I was hooked and enraptured.’ – Fay Weldon

‘A tour de force . . . This novel is about rulers and the ruled, cookery and the emergence of restaurants, sugar-craft, slavery, all kinds of love and companionship and also a great mystery story. The writing itself is beautifully fluent and quirky in its use of eighteenth-century parlance, yet this latter element was used charmingly and never overdone. It’s full of twists and turns with marvellous moments of drama and some super revelations I never saw coming! I’d recommend this novel to anyone wanting an insight into the period and a jolly good read with satisfying and very real depths.’ – Rebecca Mascull, author of The Visitors

‘It’s not often that I read a book as voraciously as this. The last was The Goldfinch by DonnaTartt, so Martine is in excellent company. I just had to know how this story of deception, intrigue and passion ended.’ – S D Sykes, author of Plague Land

‘Irresistible. Full of mystery and intrigue, above and below stairs shenanigans and cookery. Gastro-porn at its best.’            – The Arts Show on BBC Radio 2

‘A delectable dish that will appeal to readers with a taste for historical mysteries as well as fiction about food.’                   – Booklist Starred Review