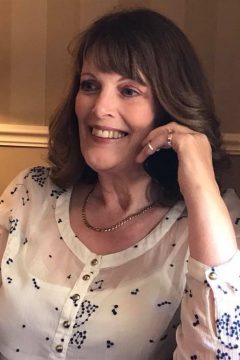 The streets Ellen grew up in, around Bradford, West Yorkshire, were not unlike those featured in the book she is currently working on. It is in and around such streets that she observed the characters who inspired her fictional ones. Ellen has always been intrigued by the person behind the facade, of how some came to be as they were, and by the reactions it drew out in others.

Writing has been a passion for as long as Ellen can remember, though other commitments, on top of her busy job as PA within a catalogue company, meant she initially concentrated on short projects. These included two mumming plays which have been performed at national folk events by a local street theatre team.

Ellen now works from home for her family company, which manufactures weaving loom components. Away from work, her creative flair has found her dabbling with dress design, including her daughter’s gothic wedding gown and a curious collection of street-theatre costumes. She also enjoys acoustic session music, nature walks and visiting historic sites. Her first love though, is writing, especially character-led fiction. In 2018, one such story won the Doris Gooderson Short Story competition.